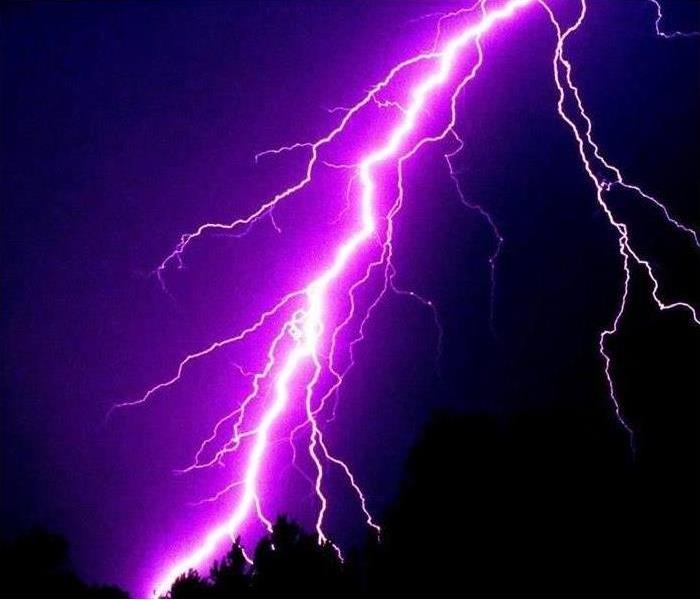 One of my favorite things about hot summer days is an afternoon thunderstorm to cool things down.  It starts with the darkening of the sky as cumulus clouds block out the sun.  Then the wind picks up and the air takes on the scent of wet grass.  Finally, the skies open up and drop their deluge of rain on the dry earth below.

Thunderstorms are most likely in the spring and summer months and during the afternoon and evening hours, but they can occur year-round and at all hours.  Many hazardous weather events are associated with thunderstorms. Under the right conditions, rainfall from thunderstorms causes flash flooding, killing more people each year than hurricanes, tornadoes or lightning. Lightning is responsible for many fires around the world each year, and causes fatalities. Hail up to the size of softballs damages cars and windows, and kills livestock caught out in the open. Strong (up to more than 120 mph) straight-line winds associated with thunderstorms knock down trees, power lines and mobile homes. Tornadoes (with winds up to about 300 mph) can destroy all but the best-built man-made structures.

As a child, we were usually permitted to play outside in a thunderstorm until we heard the rumbling sound of thunder.  Then, with the threat of lightning close by, we were ushered inside by adults.  We used to say that if you count how many seconds there were between the rumble of thunder and the flash of lightning (counting with “Mississippis” of course), you could tell how many miles away the storm was.  If there were only a few seconds between thunder and lightning, it was time to get inside.  It turns out that our game was partially true.  You should count the seconds between the sound and the light and you should count using “One-Mississippi”, “Two-Mississippi”, etc. However, you should take this number and divide it by five.  For every 5 seconds counted, the storm is 1 mile away.

What else should we know about lightning?

·         Lying flat increases your chance of being affected by potentially deadly ground current.  If you are caught outside in a thunderstorm, do NOT lay flat on the ground.  Keep moving toward a safe shelter.

·         Height, pointy shape, and isolation are the dominant factors controlling where a lightning bolt will strike.  The presence of metal makes absolutely no difference on where lightning strikes.  Mountains are made of stone but get struck by lightning many times a year.  When lightning threatens, take proper protective action by seeking a safe shelter.  While metal does not attract lightning, it does conduct it so stay away from metal fences, railings, bleachers, etc.

·         Many lightning casualties occur because people do not seek shelter soon enough.  If you consider my example above about playing outside, we never should have waited to count the seconds until the lightning flashed.  Rather, we should have run for shelter at the first sound of thunder.

·         Most cars are safe from lightning, but it is the metal roof and metal sides that protect you, NOT the rubber tires.  Remember, convertibles, motorcycles, bicycles, open-shelled outdoor recreational vehicles and cars with fiberglass shells offer no protection from lightning.  When lightning strikes a vehicle, it goes through the metal frame into the ground. Don’t lean on doors during a thunderstorm.

·         The human body does not store electricity.  It is perfectly safe to touch a lightning victim to give them first aid.  This is the most chilling of lightning myths.  Imagine if someone died because people were afraid to give CPR!